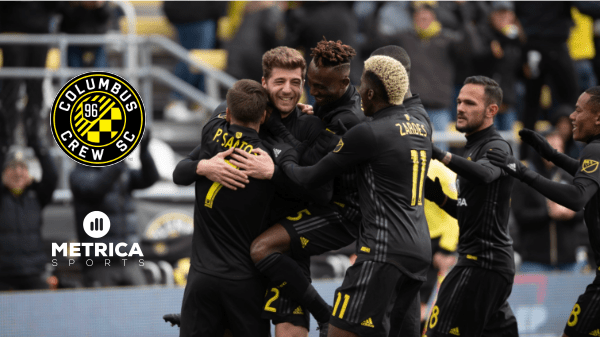 Metrica Sports are proud to announce a 2 year partnership with founding member of the MLS the Columbus Crew.

The addition of Columbus to the growing number of MLS teams using the league’s leading performance analysis and player tracking software Metrica PLAY is an exciting development for Metrica and further highlights the appitite from MLS teams for access to data fueled performance insights.

The partnership with Columbus will provide its coaching staff with access to AI powered tracking data for all 22 players and ball for all regular season and post season MLS games. This tracking data along with event data and Wide-angle autozoom video will allow staff to look at the game in a custom and unique way via Metrica’s Personal Pattern Alarms which identify and present moments in the game that are related to the Crew’s specific style of play.

Metrica Sports Managing Director, Ewan Robson described how excited Metrica is to have the opportunity to work with the Columbs Crew:

“We are proud to get the chance to work with President Tim Bezbatchenko and Technical Director Pat Onstad in their efforts to create a data driven approach to player development and performance analysis and have a front row seat in watching the development of this great club under its new ownership.”

Metrica Sports provides a combination of tracking, event and dynamic video visualizations solutions to track every player’s movement in games. Providing data points 15 times per second the Metrica software allows coaches and analysts to make data driven performance decisions and provides a platform to identify technical and tactical movement patterns that are specific to an individual team’s style of play or coaching philosophy.